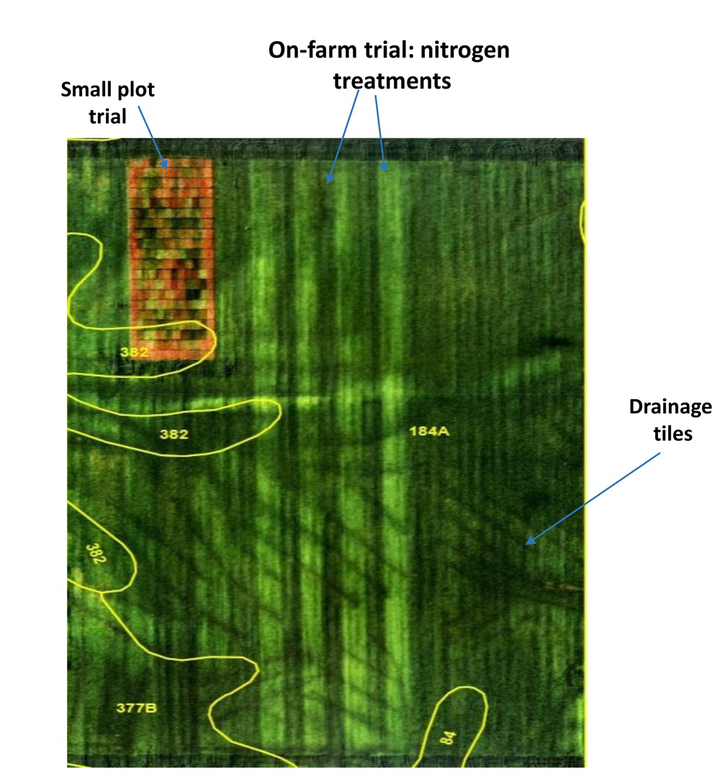 Agronomic research provides management recommendations based on small-plot trials (SPTs) and on-farm trials (OFTs) with very different characteristics. SPTs are traditionally conducted at agricultural experiment stations by research institutes or universities, while OFTs are conducted under commercial-scale conditions and managed by farmers using their own equipment. Several researchers claimed that discrepancies could occur between these two types of trials, which can make the extrapolation of results from SPTs to the farm level difficult. In our study, we conducted an extensive comparison of small-plot and on-farm trials to analyze the effect of foliar fungicide application on maize and soybean yields. We collected data on maize and soybean from five US states. Analysis of the soybean data showed similar mean yield responses and within-trial standard deviation to fungicide application between 479 OFTs and 83 SPTs. For maize, our comparison of 300 OFTs and 114 SPTs showed similar mean yield response in both. Nevertheless, the within-trial standard deviation was three times smaller in on-farm compared to small-plot trials. On the other hand, the between-trial standard deviation (measuring the variability of the effects of fungicide application across different environments) was almost twice as large in SPTs than in OFTs for both crops. Hence, the differences in the effects of fungicide on yield were similar whether they were estimated using OFTs or SPTs for both crops. This implies that OFTs can potentially detect significant yield differences with fewer replicates and thus reduce the cost of data generation. We argue that SPTs can be seen as a preliminary step before scaling up to OFTs to facilitate technology transfer and extrapolate the results in real farming conditions.

Type
Journal article
Publication
Agronomy for Sustainable Development
Click the Cite button above to demo the feature to enable visitors to import publication metadata into their reference management software.